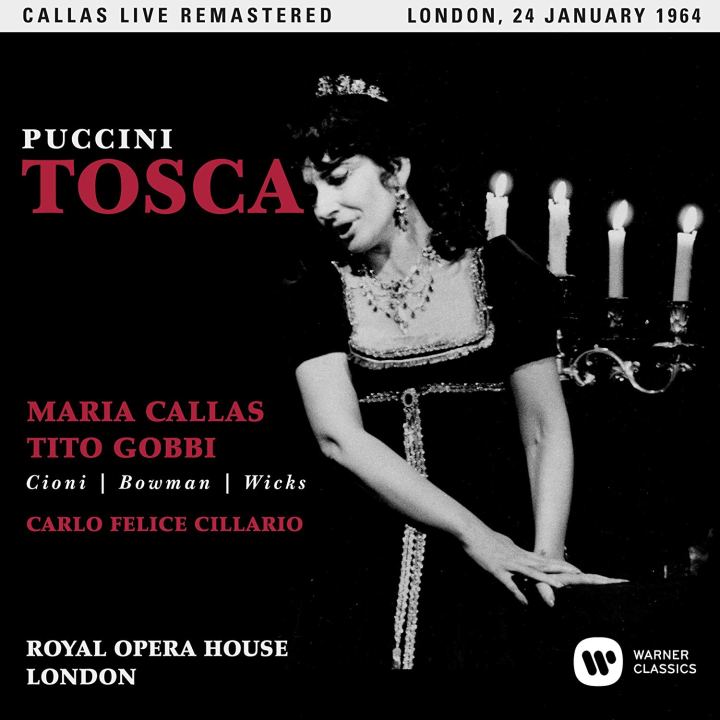 I’d forgotten that I hadn’t reviewed the final opera in Warner’s Callas Live Remastered, so, rather belatedly, here it is.

This Tosca marked Callas’s triumphant return to the stage after an almost two year hiatus. She had been lured out of semi-retiremet by Zeffirelli who was also to stage Norma for her in Paris, with the two opera houses sharing the two productions, though, in the event, the Paris Norma never made it to London. Paris did however get to see the Covent Garden Tosca. It was also the vehicle for her last ever stage appearance the following year when she agreed to sing, against doctor’s orders, for a Royal Gala. A couple of months before she had collapsed on stage and was unable to complete a performance of Norma.

At this performance, though the voice is not what it was when she made the famous De Sabata recording eleven years earlier , she is in remarkably good form, and her interpretation has deepened even further, no doubt the product of weeks of intensive rehearsal and her deep rapport with Tito Gobbi. John Copley, who was Zeffirelli’s assistant on the production, once told me he had never before or since come across such complete actor/singers. At rehearsals, Callas and Gobbi would improvise their scenes and then discuss what had worked, what hadn’t, before returning to the scene to incorporate any new ideas, just as straight actors do on stage. According to Gobbi, so close was their connection that they were even able to do this during a performance, so that if anything unusual happened, as it did one night when Callas’s hairpiece caught fire in one of the candles, they could incorporate it into their stage business.

The production has gone down in history as one of the greatest opera productions of all time, and those who were alive to see it still talk about it today. Act II has been preserved on film and goes some way to revealing the Callas magic on stage, but why oh why didn’t they record the whole thing? What a missed opportunity. The fame of the Zeffirelli staging, the iconic photos taken from it and the 1953 recording are no doubt the reason Callas is so much associated with the role, though it was not a favourite of hers, and, truth to tell, she rarely sang it after making the recording, and never at La Scala during her glory days there.

The first thing to be said for this release is that Warner have discovered a new sound source for the performance, and it is a lot better than anything we have heard before. There is a good deal of stage noise to be sure, but both voices and orchestra come across very clearly. It almost sounds like stereo, so clear is the acoustic.

The performance largely justifies its reputation, and is absolutely gripping from start to finish. Cioni is its weakest link, the voice a little thin and reedy, and, possibly intimidated by appearing alongside two such dramatic giants, with a tendency for empty overacting. He is certainly no replacement for Di Stefano in the 1953 recording, or Bergonzi in the 1964 studio recording, on which Callas is in less secure voice than she is here. He’s not at all bad, just not outstanding.

As for Callas, the voice lacks the beauty and velvet of her 1953 self, but, histrionically she is more inside the role than ever. Her Tosca is more feminine, more vulnerable, even more volatile, but somehow more endearing, and her singing is peppered throughout with wonderful little details. She is particularly charming (not a word one usually associates with Callas) in the Act III duet with Cavaradossi, girlishly happy in the way she looks forward to her future, which contrasts brilliantly with her utter despair when that future is cruelly snatched away from her.

Gobbi’s voice has also lost some of its velvet since 1953, but he too is wonderfully inside the role, his vocal acting so vivid you can almost taste the words. Actually one of the pleasures of the set is being able to hear the words so clearly, not only from the three principals, but also from all the excellent comprimarii. Cillario conducts an exciting performance, if without the many subtleties and revelations of De Sabata in the studio, which remains a first choice for the opera. That said, this one is highly enjoyable and I would place it above Callas’s second studio performance. It may not be not the essential listening of some of the other operas in Warner’s live box set are, but it is certainly worth hearing, and nicely rounds off the set, which thus covers almost all of her international stage career, from Nabucco in 1949, just two years after her Italian debut in Verona, to this Tosca, recorded the year before she sang for the last time on the operatic stage.

This site uses Akismet to reduce spam. Learn how your comment data is processed.